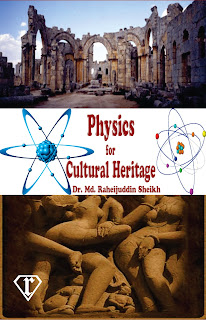 About the Author:
Better known to us by the name Shamu, Dr Md. Raheijuddin Sheikh began his journey of creative writing right from the early age of 16 years. He has authored 7 academic books, 34 radio plays (all broadcast from All India Radio), 5 films scripts, 9 documentaries and 2 science serial plays under Bigyan Prasar, New Delhi. He did B.Sc. (Physics Hons) from DM College of Science, Imphal; M.Sc. (Physics) from Manipur University and PhD from Gauhati University in the topic “Physical Methods (Techniques) in Studies of Indian Cultural Heritage.”

He bagged the first prize for the best script in the All India Radio Playwrights’ Competition – 2000 in the General Category for his play “Khongu Nanggee Banshi” which is booked for a number of repeat broadcasts on listeners’ demand.

“Selected Science Plays” and the “The Mirror” are some of his works published under DM College of Science Publications.

About the Book:
No part of nature is excluded from the domain of physics. When we speak of science we often have physics in mind and imagine of complex educations and machines that physicists deal with. After the declaration of Nobel Prize for Physics, 2013, the picture of CERN’s complex machines hunt the mind of common man.

On the other extreme when one thinks of culture normally it does not come to our mind that science by its very nature itself is a cultural trait. Every culture famous or lesser known or even unknown have its own material culture, material that are associated with it may  be a piece of fabric, a lock of hair, a piece of pottery or a piece of metal. These materials remain of the past cultures can be studied by scientific techniques that are used by material scientists of today. This area constitutes the subject Archaeometry distinctly different from the well known discipline of Archaeology. An important branch of Archaeometry is Physical Archaeometry where scientists romance with cultures of the past.

This book deals with Physical Archaeometry of some materials of the North East India to be specific a newly discovered iron smelting unit that was operational during 400 AD in Manipur., ancient bricks of the famous Kamakhya Temple and the ancient capital of the Ahom at Sibsagar (Assam) which are the two sites of immense importance to the Ahom people in Assam.

The book is refreshingly original in terms of Archaeometry of two great cultures of the North East India. It is just the beginning of an existing field and Dr Sheikh deserves special appreciation for having the courage of being a pioneer of a field that is in its infantile stage.
Posted by Ruby Press Co. at 22:02

Ruby Press Co.
Ruby Press & Co., over the last few years, has emerged as a leading international publisher of Literature, Reference, Coffee Table, Travelogue, Science & Technology, Engineering, and General Books. Ruby Press & Co. is growing with a remarkable programme of new titles including state-of-the-art monographs and proceeding volumes being published each year. The publication endorses scholars along with young and fresh talents through publication of advancing knowledge and research. Ruby Press & Co. always welcomes young and talented authors/writers with excellent manuscript in the above cited field/subject.